Published 5 years ago by Blake Tamayo 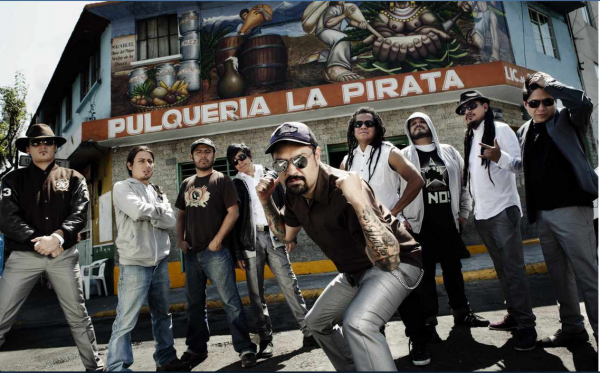 If you ever got in an argument about which is the biggest Latin Ska band from Mexico, you have higher chances of winning if you say it’s Panteón Rococó. After thousands of shows around the world and finding very good success in places like Germany, the band still has time to talk about their humble beginnings and how being from the poor outskirts of Mexico City, or from la periferia, can make for great music.

LatinAlt: I’ve always wanted to know, how is it that you guys started playing in Europe and how did you find success there?

Dario (Bassists): We just started touring  there and each year we’ve come back, in different conditions that is. At first it was a bit hard, like the beginnings of any band, but we dared to start over with people who knew absolutely nothing about Panteón Rococó. The only thing they knew was that we were a Mexican band, which was what attracted them at first, and then they understood the whole concept of the group.

It was year after year that things started going a bit better each time and we started to play at small festivals and you can say that now we are in the big leagues. We were very lucky that the european people had the curiosity bug to want to know more about Latin American culture; its music, political and social aspects… and I think we entered in a circuit very special for Panteón Rococó where it was taken in well and it gave us that support that we needed being a band new in European lands.

Misael: If we would’ve done the same thing in the US as in Europe, something interesting would’ve happen here also. It’s just that we’re too old now to come to live one, two, three months and find someone who would have us play from Monday through Sunday like we did in Europe, starting from zero. Maybe in the US there’s a way to do it but we never found it or it was never offered, so we’re too old to come and do that here and do that, we have family in Mexico. That was 14 years ago, our decision to dedicate ourselves to Europe even more than to Mexico and the United States.

LatinAlt: Panteón Rococó is very well known for having the idea of fusing latin ska with other genres, where did that come from?

Paco (Trombone): In truth, we never planned what the music we were making was gonna be about. Everybody would come up with their ideas and that’s how it started to happen. The band started with a more normal base; bass, drums, guitars, keyboard… Then us in the brass section became members and started to play other types of things, later comes the percussion adding more stuff and things started happening on their own.

I don’t think the we ever decided to say “we’re gonna play ska-fusion,” tunes simply started happening. Something that has been very useful for Panteon is that we were always very open to hear everyone’s idea and we weren’t apprehensive if someone would come in with something punk and maybe the keyboard would put in a tumbao latino or vice-versa. I think that until today it’s what we try to do; music that’s very open and free and that’s what has given the band its signature.

We started around ’95, so there were some bands formed playing. As far as Ska there were La Matatena, Sekta Core, El Parto de la Chole, La Tremenda Corte, and then we started to play in their shows. Actually, La Matatena let us open a few concerts for them and that’s how we got into that but we didn’t call it “ska movement,” it was more about playing wherever you could.

Dario: During that time Mexico City lived a close-minded attitude from the authorities towards massive concerts, and there were very few spaces for rock music at an underground level. So us in the bands, would ask to borrow a garage, a warehouse, or even abandoned bathrooms, and clandestinely do the shows and play with what was available. The audio was really bad, can’t even talk about lighting (laughs), and then we would arrange who would play first, who would bring the amp for the bass, the drums, guitars all that. Really they were times that I remember dearly because it was out beginnings and we would do it with all the energy and the want to play. Many times we had to pay to play even, we had to sell tickets and many times we wouldn’t sell even one and so we had to pay for them if not we couldn’t play.

Misael: Plus ska was the only thing that the guitarists in the bands could play (laughs). But seriously, it was a rhythm very easy to fusion so maybe that has something to do with it. I think in the movement during that time, there were just a few bands that had just one or a couple good musicians in them, also most of the band members were from middle to low social class.

Rock bands, with the exception of Maldita Vecindad, came from families from a higher social status who had the possibility to study music even go to schools outside the country. That’s how it is in Mexico, if you want to dedicate yourself to Rock (to music) it’s because your family can handle to support you without having you work. So we started playing but in the few ways that we could because very few people had an education in music. Besides, up until recently there were no schools in Mexico that taught rock music or other genres I mean, to play rock music is not seeing as a profession; Rico y Luis said it… actually I don’t know what they said (laughs). Anyway, that was important because bands would come out of from the (more poor) neighborhoods of la periféria or the outskirts. Almost all of us are from there, all these bands we were talking about. Ska was in our will, and it was the easiest thing to play but what mattered was the attitude, the parties, the want to make music and to dance more than musical execution and the tuning of the brass; of course with time we had to treat it seriously and try to improve. I think that 19 years later Panteón Rococó tries to sound better than in the beginning (laughs).

LatinAlt: You guys have played at Rock al Parque (in Bogota, Colombia), how was that experience and how were you guys treated by the public?

Paco: We’ve played twice that festival as well as in other places there. I know it’s a cliché but the Colombian audience is great. I remember the second time we played it rained so hard that the stage was completely flooded so the equipment had to be moved elsewhere, then the seas of people came following. An incredible answer from the people, many people knew the lyrics already which was a surprise for us, even though we were there before but we never promoted anything and the fact that people know the songs is something very beautiful and until this date, I think Colombia is one of the countries that we greatly wish to come back to every year because, besides the women being beautiful (laughs), the food’s great, the celebration, everything.

LatinAlt: When was the key moment when you thought “wow, we’re really making it!”?

Dario: For me it was last week when we played in Antizapan before sixty thousand people (that’s 60,000, for those who like to see numbers). I think that if you see people leaving a concert being satisfied, whether they payed or not for a ticket but went wanting to dance, to scream, and to feel good, for me that’s when you say “all my work has been worth it.” To live off of Rock in Mexico is almost impossible and we are very happy to do it, and I think we have to be grateful to have a concert each week or each mont whatever, but to have people there. For me, that’s what’s important.

Misael: We have the will because we enjoy it. Many of us play in other projects besides this band, but we’ve always had clear that where we’re comfortable is in Panteon. Even if before other things (groups) were being more successful or regardless if people responded or not. We were never like “I wanna do this for a living,” it was more like “I wanna do this the rest of my life whether or not it’s my profession.”  It started to become our craft, and yes, now we live off of music even though it feels weird to say because we play with musicians who are just beasts at playing and we just make our best effort to do it well…

LatinAlt: (cutting him off) Come on, Panteón is one of the best bands live.

Misael: Yea but when you play with guest musicians… like our percussionist for this show who could be playing with people like Santana if he wanted. He plays with Panteon and his musical level is excellent, but he also feels very comfortable with us. That is the family of Panteon and it has worked on stage. Anyway,  it became our profession and the day that we have to work in other things to continue with life we will all enjoy playing these songs that has cost us so much work but (given us) a lot of pleasure as well; to compose and have people enjoy it which is most important.

LatinAlt: Well thank you so much Panteón Rococó, we’ll be seeing each other. Weyes Blood at The Glass House on Sunday, May 17th
SIGN UP FOR FREE TICKETS HERE 88.5 FM Contributing Members: Boz Scaggs at The Orpheum Theatre on Wednesday, May 13th
SIGN UP FOR FREE TICKETS HERE 88.5 FM Contributing Members: Kaleo at the Greek Theater on Tuesday, October 13th
SIGN UP FOR FREE TICKETS HERE
VIEW ALL EVENTS
ADVERTISE WITH US