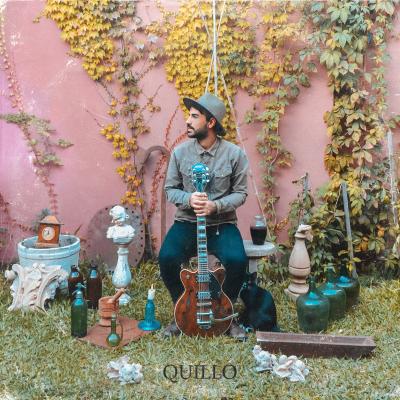 As a musician, what do you do when you're forced to stay inside due to a pandemic? The same thing most musicians do every day, they try to take over the world. They do this by creating and releasing music.

Quillén Muñiz, or más conocido como Quillo recorded (during the first two months of quarantine) and self-released a three-song self-titled EP earlier this month. Listen to the entire EP below! This EP is nothing but goodness from one song to the next, Although he's a solo artist, he invited some friends to lend a hand in making the EP. Each artists contributed to the album from their own homes in other parts of the world.

As I listen to it, a sense of calm is draped over me like one of those majestic tiger bedsheets. The first song, "The Wait Is Over Now" had me hooked with it's dangling guitar energy, classic rock ballad kicks, and lyrics that had me feeling some kind of way. The good vibes continue with a Spanish tiddle, "El Poder De Las Olas feat. Marian Alarcón." Y la voz de Alarcón, wow! Her vocals fits so well with the song's heavenly drift. By the final song, "Mi Suelo, Mi Tierra,"  I was floored and honestly, I was really getting lost in the hypnotic drum beat and tingly guitar plucks.  I hope this EP conjures the same feelings for you.

I'm pretty sure Quillo intended this.