Published 15 months ago by Adan Jimenez 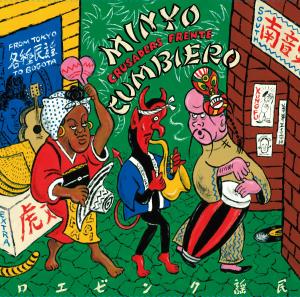 What’s up familia? I love cumbia, unfortunately, I don’t know how to dance but since listening to Minyo Cumbiero, I've been compelled to try and learn. Minyo Cumbiero is a fusion of two bands: Minyo Crusaders from Tokyo that reimagines Japanese folk songs with a Latin, African, and Caribbean flair; Frente Cumbiero is a cumbia band from Colombia. Everyone at the Latin Alt believes in unity and respect and these musicians are the perfect example of what can happen when unity and respect cross borders and embraces different cultures.

The songs were recorded by Mambonegro Records in Bogota, Columbia. They released their first collaboration video last month for "Cumbia del Monte Fuji." They recently released another video for "Tora Joe'' which I believe has more Japanese influence than their previous song. The collaboration is interesting and super fun to watch. It would be beautiful to witness and hear more of these unique multi-cultural collaborations because of the interesting product of fusing multiple regional sounds.  HECHATE ESTE CUMBION BIEN SABROSON!