Published 6 years ago by Blake Tamayo

In the lobby of a Hollywood hotel I await for the artist to have his breakfast and brush his teeth before we start the interview. It’s not everyday that I get to interview the pioneering force of Reggae in the Americas, so I relax and enjoy the air conditioned room while I stare out to the bright and hot pavement of Highland Street. Then, between all the suit-wearing executives and camera-holding tourists, an unbelievably well kept set of dreadlocks appears. I-Locks Labbé, bassist and founding member of Gondwana, greets me with a very friendly handshake even though his breakfast had to be cut short. A remarkable attitude especially after I find out that the night before during their show at the House of Blues on Sunset Blvd, the bag with all the important items that couldn’t get lost, got stolen, earning him the dreaded process of getting a duplicate of his passport. 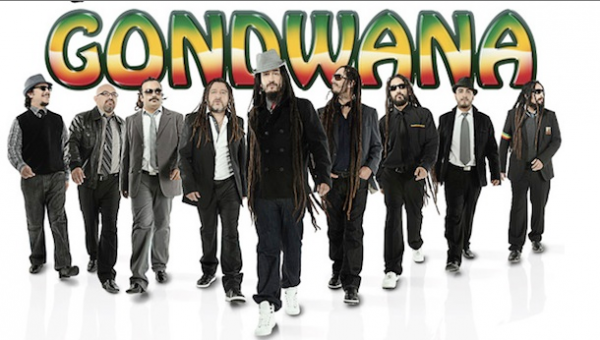 Gondwana is the first Reggae band to have appeared in Latin America (and quiet possibly in all of the Americas) and traces it’s roots back to a period when Chile was under one of the toughest dictatorships in recent history. In their trajectory they have witnessed humanity, and their musical genre, progress in a way that allows the victims of totalitarianism to heal from the past and have hope for the future.

LatinAlt: We are here with the legendary I-Locks from Gondwana. How are you doing this morning?

LatinAlt: How has the tour been?

IL: Very well, the attendance and following of the fans has been excellent, as well as how we have been received. So, very happy.

LA: What made you want to start a band of reggae? How was the music scene in the beginnings of the band? I’ve heard you went to a concert by The Police and that inspired you a lot.

IL: There was no reggae in Chile, it wasn’t really known, nor was it in Argentina, we are talking back in 1980. It wasn’t until the band The Police came to Festival Viña del Mar, which is very important in Chile, it’s during the summer and they played two nights. I saw them and then I decided to make music and something similar to them. They played that concert during their promotion of Ghost in the Machine, so it was a repertoire filled with reggae.

LA: Something that people outside of Chile wonder is, how was life there during the dictatorship (by Pinochet)? Were they oppressive towards music? and in particular to the music that you guys were making?

IL: Well I believe a dictatorship is the most nefarious thing that can happen to a society. Oppression not only towards music but against what’s considered the normal life of a person. Obviously we felt oppressed, and I personally lived in an area that was very abandoned and persecuted socially. That highly influenced a state of discontent and of social demand that I wanted to expose with this rebel yell that it’s music. Reggae gave me the possibility and the tools, it was a channel for me to express every concern that I had that moment. Of course when we started to play we had long hair or like this (dreadlocks), all the time the police stopped us and interrogated us, it was what happened. Back then in Chile we were all suspects (laughs)

IL: And if you’re hair was like this, even worse.

LA: Much worse I imagine. How is the situation now? Has it gotten better?

IL: It’s worse (laughs). No, it’s very different, there is democracy, now there are major opportunities for people. Today it’s not as costly for example to record something, so it’s very different. We have already paved the way for bands that have come out, we were the tip of the arrow of a very strong movement. There is a lot, a lot of reggae in Chile right now, and (groups that are) very confident in what they propose. There are even different branches; dance, raggamofin, roots, there is everything.

LA: How do you see the reggae scene in all of Latin America over all?

IL: It was grown a lot. There are a lot of bands who have contributed to this growth, amongst them there is of course Gondwana, but we have friends Mexico like a band called Antidoping which has already been playing for 20 years, Los Pericos from Argentina, Los Cafres, Cultura Profetica; they are bands that have been touring and taking reggae to different stages. What happened with me and The Police has also happened with us and other bands, they have gotten inspired by us and have formed their own bands.

Latin America has had a very strong development of Reggae. Because we have toured so much, we have had the chance to do a following of the growth in many countries. Now days in every country that we go to they have 2 or 3 bands that are very good and get better everyday. In Argentina there are a lot bands of important characters, such as Dread Mar, in Peru there is Semillas, also in other places like El Salvador, Venezuela, Colombia with Alerta Kamarada; a great band. So you can see that in every country of Latin America there is an important band of Reggae. It’s a phenomenon very important, it’s nothing minor.

LA: Yes, people like Bob Marley are extremely popular here in the US. How have you guys felt as far as how you’ve been received by the people here in the US and in California?

IL: Great, we have seen the growth the following of the band, the assistance of the public has been increasing over the years. It has been many years since we did our first tour in the US, that was back maybe in the year 2000, that’s when we began this romance. At some point we were absent for a few years then came back in 2010, and have been coming back every year since. We have had seen also an increase in the audience of Bob Marley.

LA: I know that this is a very cliché of a question, and many people might know it, but give us your opinion between the Reggae movement and the Rastafari religion. Can you have both without each other?

IL: I believe they are different things. Rastafari is a faith of life and reggae is a musical genre. Now, the Rastaman has taken reggae as a tool to deliver his spiritual message. Yes, they are two very different things that converge in one.

In Gondwana there has always been the believe that any person with any creed can make part of the band. Gondwana didn’t start as a Rastafarian band but across the years and during it’s natural growth, there have been and currently are people who are of Rastafarian faith, but it’s not a condition to be a part of the band. In the world there are many bands which are Rastafarian Reggae and Reggae and it’s something that is evident in the lyrics and its members.

LA: I apologize if this question has been asked to you many times

IL: No need (with a welcoming tone).

LA: Ok thanks. The relationship between ganja and Reggae. I heard you say in an interview that you used to smoke but you no longer do?

LA: Here in the US we see a movement of the decriminalization of the plant. How have you seen this movement towards legalization and what do you think about it?

IL: I think it’s a very valid action and that’s how it should be. Each person has to have the possibility to choose if something is good or bad for him/her, even more so if we are talking about a natural plant. I see everyone on that path and it’s not a very long way from having it legalized everywhere. In Chile there has been a lot of talk about it also. I think that the example that Uruguay is setting will be shared. I believe that it’s a natural course for people and governments to realize that the ganja is not damaging, but rather the contrary.

The majority of violent manifestations amongst people and things of that regard, never have had anything to do with Marihuana, so I think they will see that is something that can be used against the drug trade. If people have the possibility of having their own crop, I don’t think that will contribute to anything negative.

LA: Yes, and like you say it will definitely take power away from those involved in the drug trade.

IL: Yes, many bad situations would be avoided.

LA: Something that sparks a lot of curiosity in me…

IL: How curious you turned out to be.

LA: (laughs) What are your memories of those moments in 1977 as they happen?

IL: It was a time a desolated time. A epoch of terror, an epoch were our fraternal relation with freedom was cut from us, a wound that I don’t think will ever close. We have been trying to overcome it, but for people who have been submitted to a a dictatorship, it’s very hard for them to erase those marks, even if they want to. It’s not good for a nation to have to do with the fear, with the horrors committed, with that authoritarian power in which your voice is worth less than an insect. We are victims of a situation that will be difficult to remedy, but oh well, there are our children who have a path of freedom and of righteousness.

LA: How do you see the current situation in your country? You hear of an economic growth but you also hear of the poor becoming poorer.

IL: Of course, the economy of the free market is a thing a bit voracious, and although it’s true that there has been an economic growth in Chile, which is undoubtable, it is not being reflected so immediately. There are debts that democracy has to our country. Debts like health and education. There is poverty, not to the extreme but sometimes poverty doesn’t have to do with your house being good or bad, but rather it’s the lack of access to things that are fundamental for the human being. In this case poverty is combated with education because we are not only talking about a material poverty but we are talking about having a richness in knowledge. For us it’s elemental, as a band and for me as a member, to defend the right to a good education, the access to good healthcare, and to help children in social risk. That is something very important and it’s one of the debts of this strong economy that Chile has seen in itself in recent times.

LA: What’s the future of Gondwana?

Manager: Gondwana is over!

IL: No, I better not say that because it may become true. We have plans, everyone has plans (laughs) but in this case, the nearest thing for the band is to finish the tour, then go to Mexico, then come back to Miami, Washington. Then the return to Chile is filled with all the energy to be captured on a new album. Pre-Production is on its way, there are many songs, so what’s left is to finish everything and finalize a new album with all new tracks.

LA: Great, we anxiously await. Thank you manager for setting the interview, thank you I-Locks, this is the LatinAlt;

IL: Please!! Stop taking things from us, no more stealing!! (Everyone laughs trying to help him forget his backpack was stolen the night before with his laptop, passport, and even expensive sunglasses).