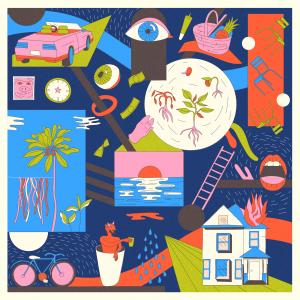 It wasn't that long ago when I stumbled on Monmarte out of pure fate, or at least I like to think so. Monmarte has been making music since 2013 with Eduardo Maldonado on vocals, keyboards, guitars; Javier Orduña on vocals and bass; Ricky Anaya on guitar. In 2015, they brought in drummer Juan Pablo. Since Pablo's introduction, that band agrees that this has helped solidify the band's sound, songwriting and trajectory. A year later, they released their self-titled album. Now, four years later, La Pelicula De lSol.

I found the entirety of this album delightful because of its ability to provide mellow, soul calming rhythms, psychedelic cadences and guitar strokes that transported me to the great rock and roll era of the past. The band says the lyrics and sounds of this album evolved into a maturity level desirable by the members. The album touches on themes of love, lost love, acceptance, conquering difficult topics and good vibes. The band says the satisfactory outcome of the album was achieved because of the hard work each and every member brought into it. To me, it feels very cohesive and I could hear the thoughtfulness of every instrument.

Here's the music video for the first single of the album.