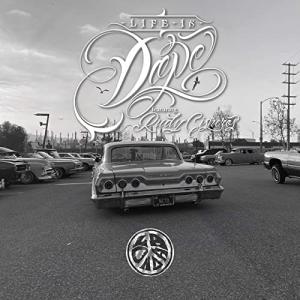 From Wilmas, California comes a band so deeply rooted in Chicano culture and Los Angeles vibes, they suitably call themselves La Onda. They have recently released their War, "Spill The Wine" inspired single, “Life Is Dope feat. Rudy Cisneros.”

The song in all its simplicity is meant to bring smiles, some feel-good feelings, and the best medicine of all, laughter. It’s filled with some west-coast, California heatwaves, cruising-down-the-streets-of-East LA-in-your-lower-rider-next-to-your-ride-or-die-type-of melodies. The song is paired well with your favorite Mexican chela and enjoyed best next to your loving ruca. La Onda and Rudy Cisneros team up to remind you that "life is dope dawg, no matter what life throws at you. "

For those who might not be familiar with Rudy Cisneros, he is a Chicano/cholo character created by Mike Catherwood, and a former recurring character on Kroq’s Loveline. This is where the band came to know about Cisneros/Catherwood.

“He was a cool representation of funny Chicanos on Kroq and when he was on Loveline it was a reason to pay attention to the show. It was the closest thing we had to free healthcare when it came to information about health, life skills, and all the different kinds of personalities, red flags and addictions. To us,  his work, presence, and influence are an LA treasure.”

At some point during the band’s career, they decided to send Cisneros a DM via Instagram but received no reply. According to the band, it wasn’t until they had released the music video for their single, “Ride” back in January that they got a response from Cisneros. They attribute the success of the video/song to Cisnero’s response. In my opinion, the attitude, sounds and the musical Chicano culture that La Onda brings to the table was one of the reasons they were able to catch his attention. They are the perfect match for the humor and lifestyle Cisneros represents.